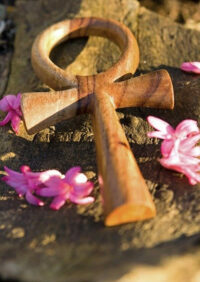 Relic is a derivative of the Latin words reliquiae, which means “remains,” and “leave behind, or forsake.” A relic, in the broadest meaning, is a saint’s mortal remains, while a secular relic is anything that has come into contact with the saint. Christian religion places a strong emphasis on relics, followed by Buddhism, Islam, shamanism, and many other religions. It is strongly believed that relics can heal the sick, and offer protection from harm, death and sicknesses, as these objects have been given the divine blessings of God, allowing the particular Saint to aid and watch over the faithful masses.

What Are the Three Kinds of Relics?

First Class Relics: These are bits of the mortal remains of saints; they remind us of God’s actions through His holy ones in guiding the world. These remains could be any part of the body – bone, flesh, a drop of blood, or even hair. Thus, a saint’s finger, skull, or any bone would all be first-class relics.

Third Class Relics: These are items that a saint touched or that have been touched to a first or second-class relic of a saint. Most of the relics that laypeople have are prayer cards that have touched either a saint’s body or their personal items. This is also true for things touched to instruments of Our Lord’s Passion. A Rosary touched on the Relic of the True Cross and even becomes a Third Class Relic of the True Cross.

In Christianity, Acts of the Apostles contains the first mention of relics in Christian literature. The bones of the bishop of Smyrna were said to be “more valuable than precious stones” in the Martyrdom of Polycarp, which was written in the second century AD. In Christianity, the reverence of relics persisted and increased.

However, there has never been a formal endorsement of the usage of relics in Islam. Protestant Reformers in the 16th century all had a negative view of artefacts. Islam, like Christianity, has a cult of relics connected to its founder and saints. However, in Islam, the use of relics has never received official approval; in fact, Muslim theologians have frequently condemned the veneration of relics and the associated custom of visiting saints’ graves as incompatible with the Prophet Muhammad’s insistence on his own purely human, nondivine nature as well as his vehement condemnation of idolatry and the worship of other than God.

Buddhism had relic worship established as canon from the beginning. According to tradition (Mahaparinibbana Sutta), in response to a desire for the Buddha’s relics, the Buddha’s cremated bones were divided evenly among eight Indian tribes. It is reported that the emperor Ashoka redistributed some of the artefacts among the countless stupas he had built.

Because Rome was simpler for European travellers to get than the Holy Land, it became a popular destination for Christian pilgrims. The tombs of Saints Peter and Paul were covered by enormous basilicas built by Constantine the Great. Other ecclesiastical buildings gathered relics and developed into pilgrimage sites throughout the Middle Ages. Sites like Saint Frideswide’s in Oxford and San Nicola Peregrino in Trani attracted people with the relics of nearby saints. Pilgrims would travel to locations allegedly blessed by Christ or notable saints, such as the Holy Sepulchre in Jerusalem. These locations stood out due to the presence of sacred relics. Several verses in the bible show the effects that these relics can have, and their significance for God-fearing Christians:

(2 Kings 2:14) – Elisha took the cloak that had fallen from Elijah and struck the water with it, and as it divided to the left and right, he crossed over.

(2 Kings 13:21) – So they threw the man’s body into Elisha’s tomb. When the body touched Elisha’s bones, the man came to life and stood up on his feet.

(Acts 5:12-15) – People brought the sick into the streets and laid them on beds and mats, in the hope that Peter’s shadow may fall on some of them as he passed by.

(Acts 19:11-12) – Handkerchiefs and aprons that had touched Paul were taken to the sick and used to cure their illnesses and drive out the evil spirits.

(Ex. 13:19) – The Israelites took Josephs’s bones when they departed Egypt, for he said “God will surely come to your aid, and then you must carry my bones up with you from this place.”